Yesterday morning I fell out of bed and instantly started jabbing at my iPhone in a frenzied attempt to get tickets for Jamiroquai at the O2 – without my specs. Needless to say, by the time I’d finished squinting at the screen, found the right page, verified I wasn’t a robot by poking all the squares with a house, car or street sign in them and watched the spinning wheel of doom go round and round for a thousand years, all the tickets were gone.

All the tickets worth having, that is – there were still some seats available. It’s just that they cost the same price as a round trip to Paris and were located even further away. Like the moon.

Now I love gigs – for me, there’s nothing better than the buzz of a banging live concert. I still remember my first – The Levellers at Brixton Academy. I was about 14 at the time, I crowd-surfed over the mosh pit, and I was instantly hooked. Shepherd’s Bush Empire, London Astoria (my favourite, may it rest in peace), the Royal Albert Hall, the Roundhouse, Koko – all fantastic venues. Small enough to feel like part of the action, yet big enough to house a decent crowd.

But once you start getting into the Wembley Arenas, let alone the Wembley Stadiums of this world, then seriously – what is the point? We just end up millions of miles away staring at a screen. You may as well just stick some earphones in and watch them on YouTube for free.

My mate Anjali excitedly WhatsApp’d her view from the O2 a few weeks back with the caption: “OMG – we might actually see Drake!!!” And I was so excited for her – as if being able to see the person we’ve paid an arm and a leg to watch is some kind of added bonus instead of a given.

And we’re always so grateful! I mean it’s ridiculous – for that price she should have been curled up in Drake’s lap whilst a fleet of manservants fed her grapes and fanned her with ostrich feathers as he rapped.

Just last week, Facebook reminded me that on March 5 2014, I took my little sister to see Beyonce shake her diamante-encrusted crotch at the O2 in the Mrs Carter show. I can assure you that if her name hadn’t been helpfully emblazoned on that giant curtain (see my sister’s snap), we’d have been hard pushed to work out who was twerking away up there amidst all those flashing lights and pyrotechnics.

And those were decent seats (I don’t like to think about the eye-watering sum I forked out for them. We don’t dwell on such things). What you can’t see in this photo are the 15,000 other people who were even further back and higher up than we were.

Which brings me to the ordeal of forking out an eye-watering sum for crappy seats. Way back when in 2007, we went along to see old Trousersnake Justin Timberlake’s FutureSex/LoveShow at the O2 – one of the first gigs at the venue, which had only just opened as a concert space the month before.

We’d innocently booked some seats near the back of Level 4. Which is much, much higher up than it looks on the seating plan. There were no screens supplied at that time, either – or binoculars, for that matter. Even the Hubble telescope would have struggled to locate him on stage. Up to this blessed day, none of us could say for certain whether it was really even JT down there – we could have been screaming for the cleaner for all we know. And I vowed never to make that mistake again.

To avoid the same rookie error, please familiarise yourselves with the following two diagrams.

This is a seating plan of the O2: 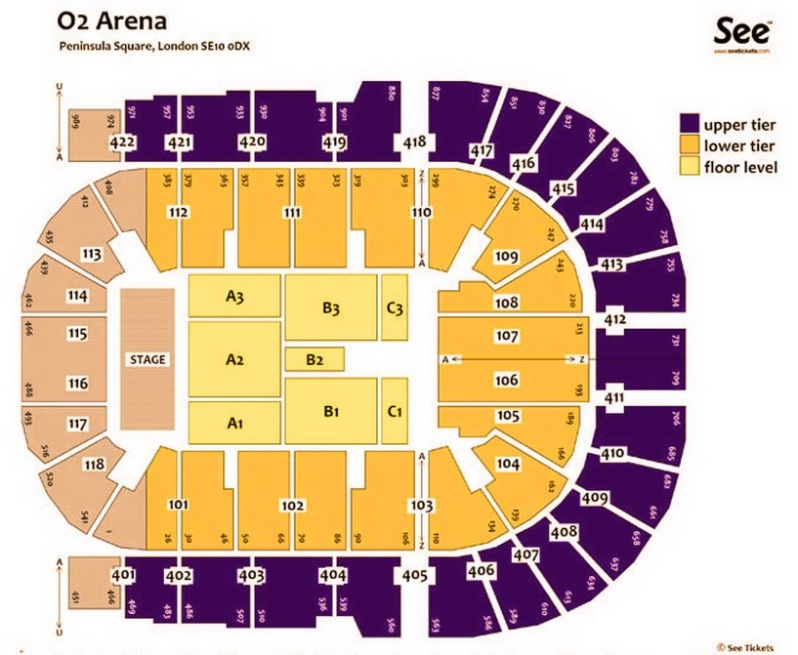 And this is an accurate seating plan of the O2: 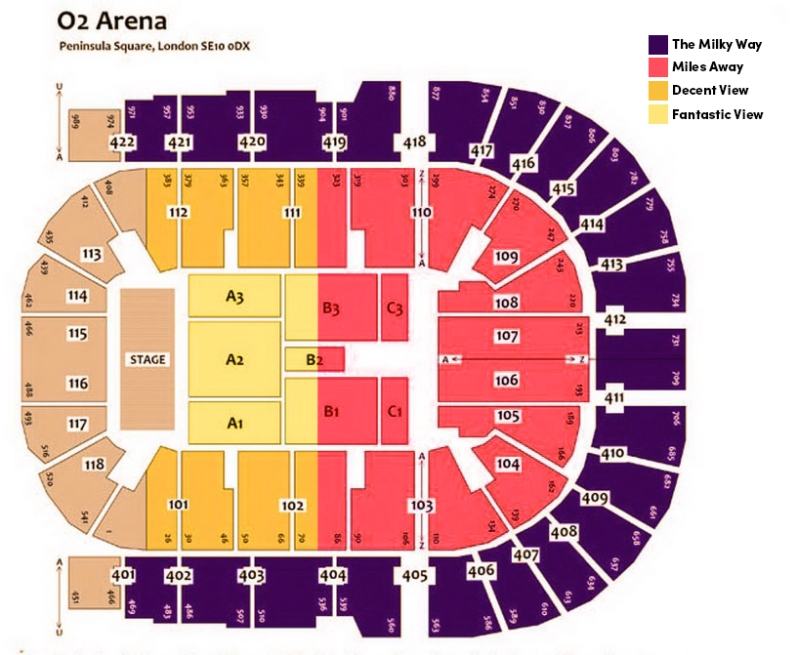 Level 4 is literally a no-go zone – even its own website advises you not to buy tickets up there if you’re afraid of heights. It’s the reason why I had to turn down the opportunity to see Bruno Mars next month. For as much as I adore that pocket rocket’s electric on-stage antics, I have no desire to try and watch Bruno Mars from Mars – he’s tiny enough as it is.

It winds me up that they’re even allowed to build concert venues so vast that anyone more than a quarter of the way back might as well be outside – especially when they’re still happy to charge a premium rate for an inferior view.

For those of you still wondering whether it’s worth the risk, let me try to recreate the Level 4 experience:

I heard that Queen Bey recently pulled out of Coachella festival due to her pregnancy – which may not be such a bad thing. I mean if we were straining to spot her in an indoor arena, what chance would you have in a desert? At least she’s been replaced by Lady Gaga – she’ll probably fly over the crowd with searchlights shining out of her butt and fireworks spraying from her nipples, so visibility really shouldn’t be an issue. Perhaps I’ll watch her performance on Google Earth.