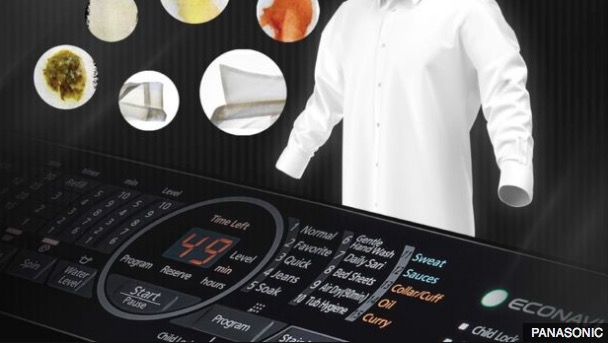 The other day I discovered that Japanese electronics manufacturer Panasonic recently launched a washing machine for the Indian market that features a ‘Curry’ button. Literally.

Once I’d finished blinking in disbelief, I Googled the story across multiple sources including The Huffington Post, the BBC and The Telegraph. Not a single publication had batted an eyelid at the fact that this ‘Curry’ button was seemingly rude at best, and possibly racist at worst – instead heralding it as a shining example of customer service! It can’t be both, right?

So I had to check myself: was I just being super-sensitive in this era of ultra cultural correctness? Or was there something seriously off-key about this multinational’s choice of terminology?

According to Panasonic, the new washing machine – The StainMaster – was designed in response to a high number of complaints from Indian customers who were struggling to fully remove curry splatters from their clothes. It took two years to develop the new settings, which involved analysing the typical ingredients used in Indian curries in order to identify the main culprit: turmeric, a bright orangey-yellow spice used in many Indian dishes. The reason curry stains are so difficult to remove from clothing is because this ground root contains a compound called curcumin, which isn’t soluble in water.

Currently, only around 10% of households in India actually own a washing machine, with the majority handwashing their laundry instead. The traditional way of sorting out these stains involves pre-soaking the clothes in hot water, and then leaving them to dry in sunlight, which helps to fade the stains. So the company investigated the optimal time, water flow and temperature setting required to fully dislodge them from the fabric. It states that its aim was to “develop products that meet the country’s needs and expand its market reach and market share” – which is currently dominated by South Korean brands like LG – as well as “respond to local needs for better washing performance”.

Panasonic is a business – it’s spotted a gap in the market and found a way to capitalise on global cuisines in order to differentiate its brand and make more money. At 22,000 Indian rupees (£270 or $330), the StainMaster costs about 10% more than other regular washing machines on the market. Presumably, the company will now just work its way around the world adding various pesky regional delicacies to its washing machine dial and marking up the prices as they go, and hey presto – everyone’s a winner.

But still… the wording, though! : 0 Maybe I’m just turning into a delicate little flower in these PC times but it really jarred me. I mean it just seems so… blunt! Okay yes, I’ll accept that it ruffled my feathers at first glance and clearly that’s my problem, not theirs. The Indians certainly don’t seem to mind – the company’s already sold 5,000 StainMasters in the country since launching on March 10th, and hopes to shift 30,000 over the next 12 months.

I mean for starters, there’s absolutely no point in limiting a ‘Curry’ button to India – EVERYONE eats curry, so they’ve already missed a trick there. It’s practically the national dish over here in the UK – we’ve got more curry houses in London than there are in Mumbai, and an estimated 10,000 in the country. Is the British version going to have a ‘Curry’ button on it? That would really mess things up if they’ve already got a ‘Fish & Chips and Tetley Tea’ button all ready to go. Can we expect a ‘Pizza’ button in Italy? A ‘Jerk Chicken’ button in Jamaica? A ‘Sweet & Sour Chicken Balls’ button in China? Well. Let’s wait and see.

North Sea Jazz Festival (and the Height of Insensitivity)